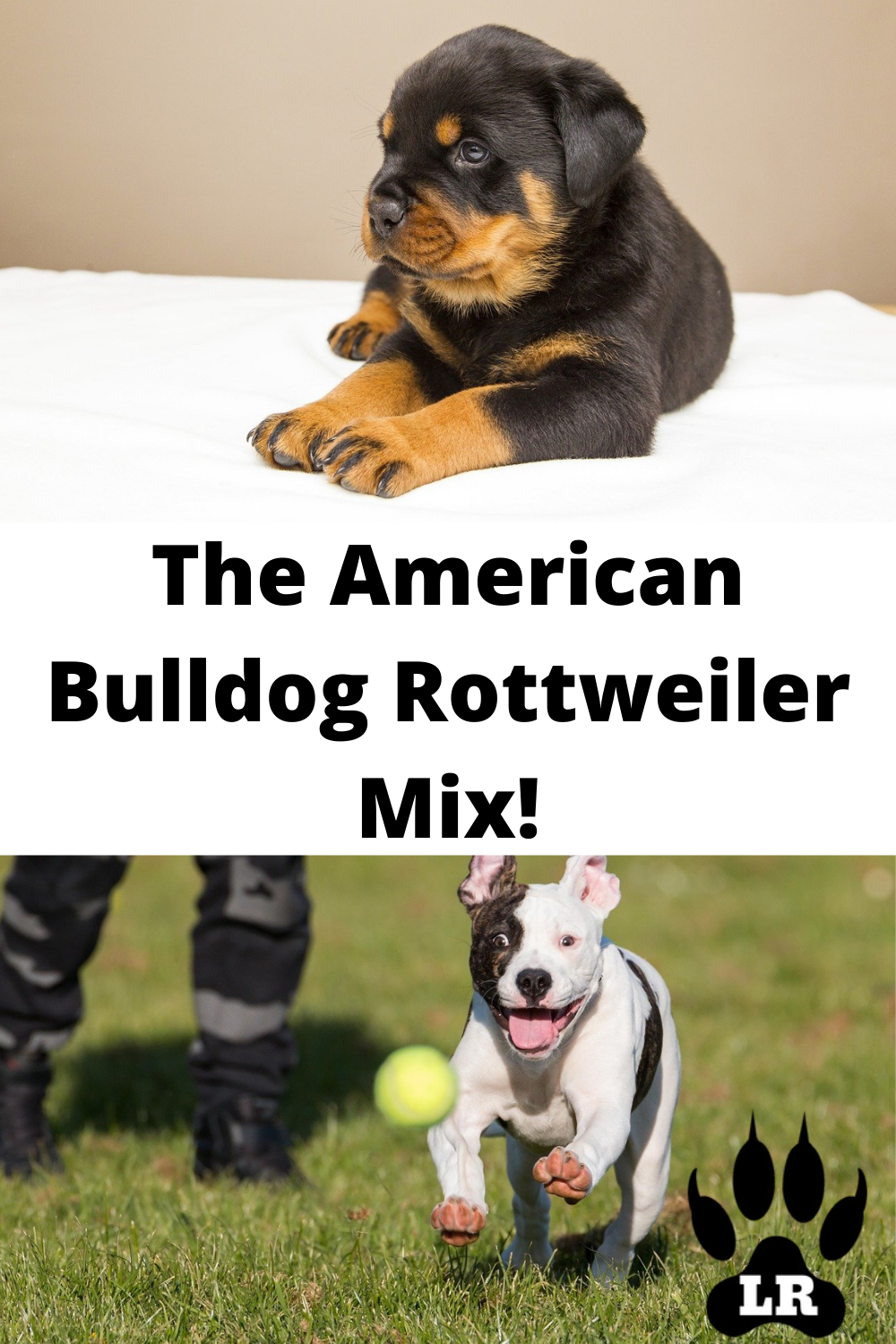 This breed needs an active family who gets the dog’s constant drive to become alpha of the pack (humans included!). Be ready for a constant boundary-pushing from the American Bulldog and Rottweiler Mix to become the pack’s alpha.

Allow me to say that this breed is most definitely not for beginners or intermediates! It is for dog owners who have had tough dog breeds like the Cane Corso, Rottie, Alabai, Dogo Argentia, Caucasian shepherd.

If you are an experienced dog owner who loves a powerful dog breed that has been used in some cases for thousands of years and wish to cut your teeth on a relatively new tough dog breed, then this breed is for you!

This article will take you through every critical fact about the American Bulldog Rottweiler mix. First, we will talk about both parent breed separately then:

Our last part of the article is about the BullRott our goal is to provide you all the information you need to make a well-informed decision on your next furry family member.

The American Bulldog is powerful, stocky, and fierce when it wants to be and loving, playful, and friendly to the people it knows. Built to be fast enough to chase down stray cattle and defend the farm from roving rustlers, coyotes, dogs, and to hunt wild pigs. They are also sturdy enough to go about the farm and haul a wagon filled with meat, hay, dung, or whatever else.

They are very intelligent, much like the other guard dog breeds, and if not given the proper socialization needs, they will attack strangers. When with the family, they are goofy, loving, and very gentle to the kids; the American Bulldog is a decedent of the old English Bulldog.

The immigrants from the old world brought them over because they were so reliable in their loyalty and devotion to a job. The American Bulldog is more known in America’s southern states because most of the immigrants moved down to the south to get better farmland.

The Rottweiler is the most infamous guard dog in the world! But did you know that they are also one of the oldest herding dog breeds in the world as well? The Rottweiler dates back to Roman times. Back in 70 A.D, the Romans took the Rottweilers from Weiler, Germany (now, Rottenberg), hence Rottweiler.

The Romans used the Rottweiler for herding cattle and protecting the cattle and other herd animals from wolves and other predators. Rottweilers were also used as meat cart pullers as well as personal protection detail.

Did you know that in the mid-1800s, the Rottweiler nearly went extinct? Yes, the Rottie almost went extinct because trains were now a much cheaper way of transporting meat. If not for several lovers of the Rottweiler breed in the 1900’s, this breed would be extinct today, as indicated in this article on Rottweiler facts.

The American Bulldog Rottweiler mixed breed is a powerful yet elegant dog that needs firm, constant, and loving treatment by the owner. Both parents are headstrong dogs, and it should not be a surprise to anyone that the trait of not listening to you or someone else’s commands are definitely not on their list of things to do if they don’t respect you.

The mark of a great pack leader for these guys is to have them listen to your commands. In fact, the mark of a great leader is for your dog to be so in-tuned to your moves that he/she is already waiting for you before you even know what you are doing.

In this last part of the article, we have the article split into six different sections, all of them vital to keeping your Bullweiler happy for the rest of his/her life!

Training of This Beautiful Breed!

I often say that training, socialization, and, finally, exercise are the key foundation for making and keeping a stable and happy relationship with your dog. If you only do two or just one of these, then you are creating a situation in which it will bite you in the end. So throughout your dog’s entire life, these three rules must be a constant companion throughout the dog’s life.

As a baby, work these commands over with, of course, frequent breaks in-between the training sessions. Make the training longer than the playing by as much as half or even more, and make the training fun with lots of praises and a little treat here and there.

When training, it is imperative that you do not give up on your commands. Repeat them repeatedly until they comply, then redo the command once you have praised the puppy for his/her great work. This breed is stubborn, so you will need to repeat yourself constantly.

As the dog grows older and masters more commands, make sure to frequent past commands so that they don’t lose a old command.

As a puppy, if you can take them out into different environments, say the park, coffee shop, or just walking the streets would be super beneficial to getting your pup socialized. One of the most important things not to do is take your puppy to the dog park.

Dogs can be very mean and can scar such a small puppy; secondly, the puppy has not had its shots, so they can transmit and or get a disease. So never take your puppy to the dog park until they are old enough to be able to hold their own and be able to defend against any diseases.

Exercise for this breed means running about a giant property or being put to use on a farm. May it be herding or protecting against coyotes or humans. As strange as it may seem to read, some people still steal cattle, ducks, or sheep. So there is definitely a need to have a guard dog that will protect the flock/herd.

Temperament of the AM Bulldog Rottweiler Mix

The temperament of the Rottie American Bulldog is:

Both dog breeds were created to protect the herd and the owners, and both dog breeds will die to protect you and the house. So proper training with lots of socialization with humans and other animals is essential during the formative years. If you show you do that you are the alpha of the pack, they will follow you.

If you do not show your dog that you are the alpha with firm training, you will find that your dog will follow you through fire. However, you must beware that this dog breed WILL test your limits each and every day. IF you fail to correct it, then they will capitalize upon the opportunity.

The Rottweiler mixed with American bulldog is not very friendly to strangers if not trained right. They will be very aggressive if you don’t do the training and socialization properly, but with the family they can be safely left with toddlers and nothing will happen to them!

One question that frequently came up is if they are a great guard dog? And the answer is YES! They make for fantastic guard dogs in some cases; both breeds are still used as guard dogs in many countries. It does not matter if they were trained or untrained because they can instinctively take down the intruder!

But remember, if you want your dog to be a great guard dog, the trick is to first train them properly in the basic commands! Without firm yet gentle training, your dog will be out of control!

If you are in the neighborhood for guard dogs and are unsure if the Rottie American Bulldog mix is your guard dog type. We have an article filled with 20 of the best guard dog breeds!

Conclusion of The Article!

Overall the AM bulldog Rottweiler mix is an alpha dog breed that needs a firm yet loving owner. If they find you wanting, they will not follow your commands, and you will know that you are no longer in charge. So make sure to give them lots of exercises, socialization, and, more importantly,9 training throughout their lifespan!

You do not want to be found wanting in any way by this alpha-driven dog breed; if you are new to the dog world, don’t get this breed. They are for experienced dog owners who can deal with the things that the American Bulldog Rottweiler Mix pulls on you.

Decided That the Rottweiler American Bulldog mix Is Just Too Much?

If you like the Rottweiler American Bulldog mix idea but ultimately think that combination is just a little too much for you/your family, check out these articles:

Do you have an AM Bulldog Rottweiler mix or a Dog? And wish to share it with the LabRottie Nation?

If you have an AM Bulldog Rottweiler mix and you wish to share him/her with the LR nation photo gallery. All we need is your dog’s name, photo/s, and a short history about him/her. By the way, we accept all dog breeds, not just the AM Bulldog Rottie mix.

Email us the information and we will get it all loaded up onto the LR nation photo gallery!

For those of you who have or are going to get a new puppy! And or you want to browse through the names and, may I say adorable puppy photos. We have several dog name article just for you!