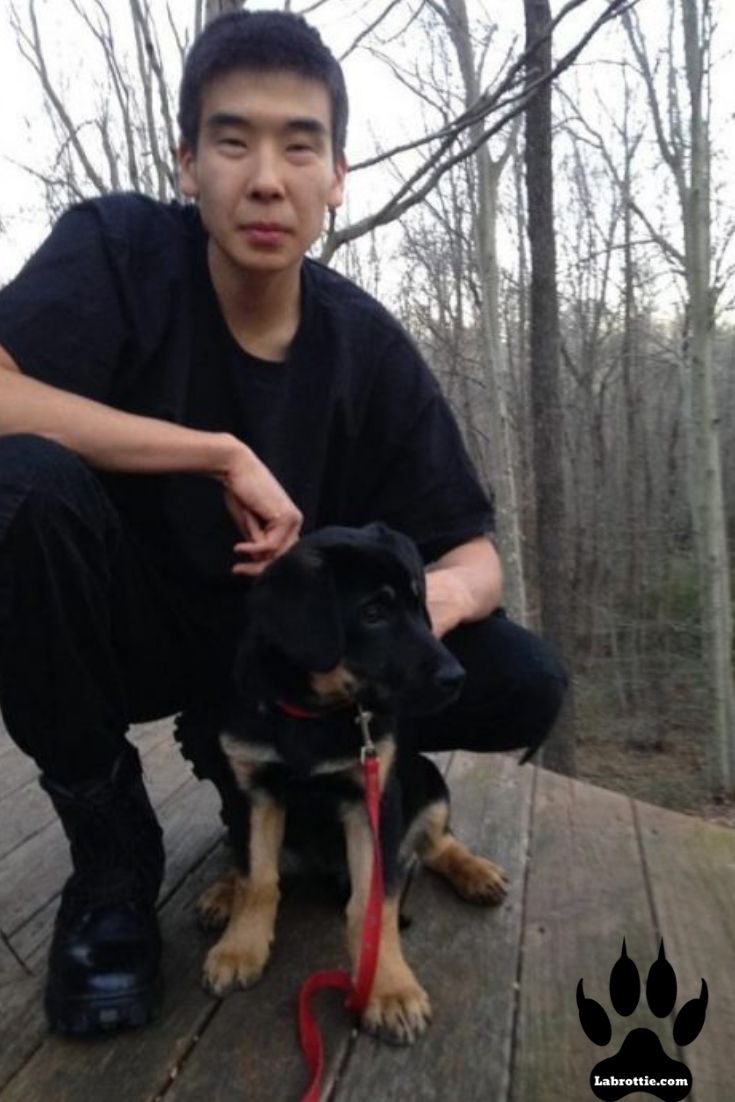 Hey! That’s me, Nikolai, with my beloved dog, a labrotties named Zeus. I was born in Russia (native Russian, of the Koryak tribe), and my family adopted me when I was two. I’m proud to be an American living with my family in North Carolina, USA.

Now… here’s the story of Zeus!

On January 26th, 2017 Caspian, my sister’s Maltese was yipping and yapping at something outback.  My mother and sister went outside to investigate the source of excitement. They discovered a black puppy with brown markings lurking at the corner of our house.

They tried coaxing the puppy to come, but while it wagged its tail a little, it retreated further. The puppy cowered until it was out of sight we’d never seen this puppy around before.

They played this game of approach and retreat for several hours of trying to coax him with dog biscuits and sweet talk.

By the time my father and I got home a couple of hours later, it was dusk, and the puppy was hiding under our deck. But he wasn’t just under the deck. He was under the section with the lowest crawl space, of only approximately 18″, hiding as far back under, and tight as he could go.

I stepped out of the house with a flashlight and shined it down under the deck, to see Zeus the puppy shivering. I tried to coax him to come out with food, water, and treats. Unfortunately, he still remained determinedly stuck under the deck.

After almost an hour of trying to tempt him with food, I sucked it up, got onto my belly in the wet frozen ground, and low crawled about 15 feet back. Of course, I had to creep along gradually because I had to make a little trench so that I could get out and not get stuck.

Cautiously, I approached the puppy. I was shivering in the damp. But, the poor, terrified puppy needed help. I slipped the leash around his head praying he would not try and take a bite out of my arm.

When I tried pulling him out, he wouldn’t budge. Because I was afraid of a dog bite, I called for reinforcements. My family sent me a few more leashes by way of Zoya, a King Charles Cavalier, she kindly walked under the deck and dragged the extendable leashes to me.

When Zoya came Zeus became a bit active, he sniffed the air and then stuffed his head back down. I attached the leashes together and then gently pushed Zoya back out. Where dad, mom, and my sister assisted me in pulling/pushing him out. After 40 minutes or so of trying, we slowly dragged him out from under the deck.

He was a terrified puppy, kicking and screaming all the way out. We were amazed at how incredibly strong he was for just a puppy of about three months.

Eventually, we got him inside. We rubbed him down and cleaned him up. He was dirty from being lost and then getting wedged under the deck in damp dirt following a rain. Plus, he’d peed and pooped himself out of fear — poor little guy.

With so much love and attention focused on him, he stopped struggling so much.

We placed him in a dog bed over a heater in a small powder room in the corner. He shoved his face into the corner and stayed in that position. We placed towels over his body to help him feel warm and feel secure and left him food and water.

Since it was getting late, we let him sleep in the powder room, where he was working hard at keeping his nose buried in the corner. We call this “ostrich syndrome.” You know, “If I don’t see you, you don’t see me.”

Zeus remained that way for the rest of the night and into the other day.

Finding a home for the lost puppy

Now we’ve got a dog. We were not looking for a new dog. I mean, I really wanted one but knew that it was a big responsibility and it just wasn’t the best timing.

But, we could not find his family; we received not one response to postings and flyers. We found no identifying chip, and the veterinary staff didn’t recognize him.

So we decided to foster him until someone decided to take him, Zeus the Labrotties stayed in the bathroom. He ate nothing and drank, not a sip of water for at least three days. When we took him outside, we had him on a leash, but he did not do anything but try and dig himself a hole to hide in.

We took Zeus, Zoya, and Caspian on several walks throughout the entire week, for the first four walks I had to carry him up a huge hill and back down it because if set down he would lay down and not move an inch. Once he got used to us Zeus would walk a certain amount and then lay down and I would need to be carried all the way back home.

One night I was laying about when my mom called me asking me to take him out. Zeus had gotten out of the bathroom and was whining at the door. I attached a leash to a collar and took him out, and he peed and peed for a good two minutes before happily wagging his tail and trotted up the steps and back into the house.

The next morning we took him to the vet to get a full examination, the people at the vet said he was most definitely a Labrotties. Showing us pictures of other labrotties, we took Zeus back home after the vet gave him the A-okay. And Zeus was literally a different puppy that morning forwards.

Constantly following mainly me about inside and out, I, of course, had a leash on him just in case there was a sound that scared him and he chose to run off again.

Which nearly happened it was a good thing I was near by and was able to dive for the leash as he bolted away as a tree crashed down near by.

Zeus was, of course, a bit shy towards his foster family members, but learned quickly that our house was filled with nothing but love. A few weeks had passed with not a single person asking for Zeus! Well… Except for me. During that time he and I built a very strong relationship, soon enough Zeus was following me about and was following every command I gave him.

The very first encounter with the cat Mystique

I had found my cat back in October of 2014, she was skin and bones, and it was just about to become winter. She walked right up to me, and I picked her up and took her inside. Where I feed her raw chicken and my sister and I gently played with her, or should I say tried to.

Mystique was too interested in food at the moment, that very night I slept on the laundry room floor with Mystique curled around my head. When Zeus came, she was defiantly not amused by the new addition to our household. Zeus’s very first encounter with the cat did not end very well.

Their first encounter was under our couch; it was a rainy winter night, with my Grandmother visiting us. We were watching a movie with Zeus under the sofa hiding from the “scary sounds and thumping.” When the cat walked under the couch for the first two seconds, it seemed as if everything was going to go off without a hitch.

Then the cat hissed Zeus gave a loud bark of excitement and the cat skidded out from under the couch right in front of Caspian who though it would be a good time to bite her tail.

With a quick jab, she smacked Caspian on the nose and was off with both Zeus, (who had been wiggling about trying to get out from under the couch and Caspian who had stood they’re stunned) now in hot pursuit.

And then there is me chasing after all three of them, all three animals dashed through the dog door and were whipping around the corner of the house. Meanwhile, I was still trying to put on my shoes, and once I had them on, I was off to the races. It must have been one funny sight the cat, two dogs, and the human all running after each other!

With no one asking for Zeus… well actually that’s not true because I was constantly asking daily to keep him, and finally, after two and a half weeks of hard work, I was able to keep Zeus the Labrottie. From that moment forward we became best buddies, and he’s an awesome dog. I named him Zeus.

Zeus gives me a great daily workout, and it gives him a good run around too, and the family loves him, the cat tolerates him, and Zeus puts up with the bullying of pipsqueak aka Caspian, my sister’s Maltese.

Howling to sirens is something that Zeus taught Caspian how to do, and Caspian loves it. It’s one of the main times they really bond. Singing together brings them together! You can find a video of our dogs howling here.

I’ve fallen in love with my labrottie. A lady who raises German shepherds said he also has some German shepherd in him. After that we wrote about ShepRotties.

Then, when we did the DNA test, we were incredulous. The results were none of what we thought, but… he did end up having some White German Shepherd in him, so that lady knows her shepherds!

Thank you for reading this article on Labrotties! This is the first installment of more to come as my adventures with Zeus continue.

For those of you who have or are going to get a new puppy! We have several dog name articles just for you.