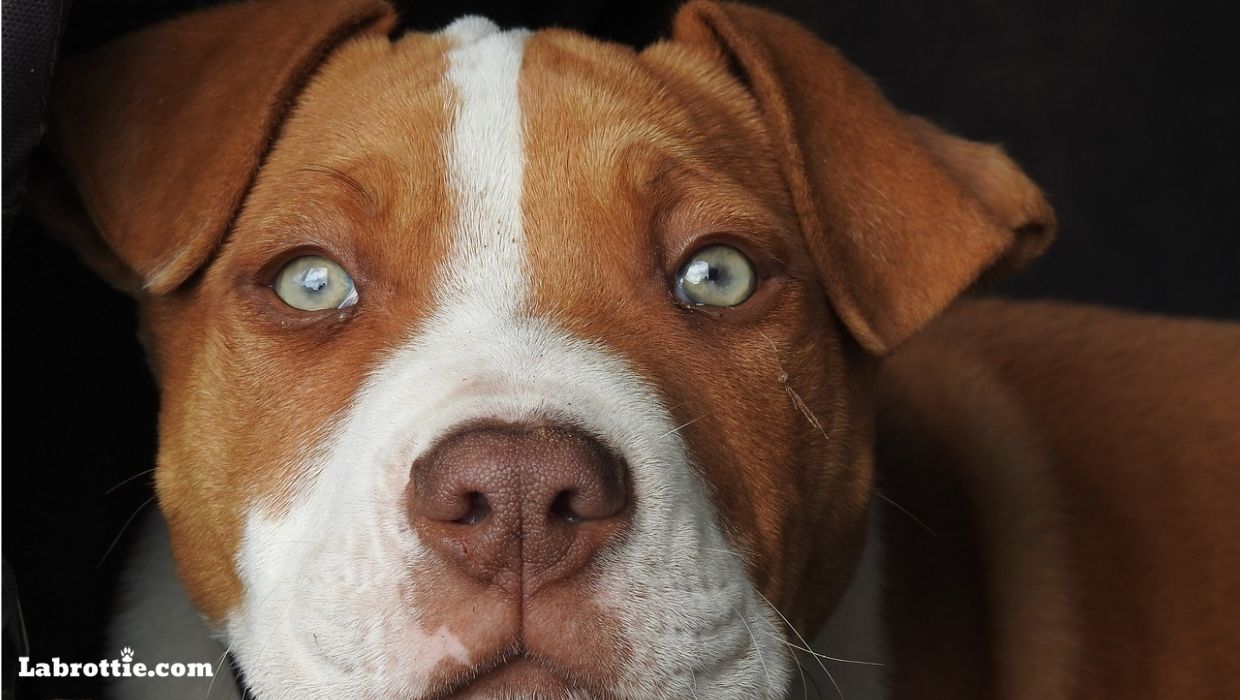 What is a Labrabull? Where does it come from? Well, we have those answers and many more answers to your questions. The Labrabull is a mix between the Labrador, which is the number 1 family dog to own, and the American pit bull terrier, which is getting a bad black eye due to some genuinely rotten apples, and from the media.

Most of the time, the dog lacks training, socialization, and maybe love when he/she was a puppy. We will, in this article, talk about the Labrador. Then we will give the history of the Pitbull terrier before we dive into the Labrador Pitbull mix.

The Labrador Pitbull Mix is a headstrong dog breed that needs alot of socialization, training, and exercise throughout his/her lifespan.

America’s/U.K’s favorite dog breed, the Labrador Retriever, is an agreeable and friendly companion. This breed holds a significant distinction as an ever-popular choice for families. Labs are highly social and have a love for all people, children, and animals alike, which explains their widespread popularity.

The Labrador was breed in Canada; they worked to help fishermen and hunters retrieve their catches. They needed a friendly dog that loved fetching and being in the water.

The Labrador was sent over to England in the 1800s by some English noblemen who had discovered the breed while visiting Canada. Those breeds began the line that is now the English Labrador Retriever, bred more for show, companionship, and lazying about.

The Pitbull is not a breed but merely a catch-all for all dogs that have a similar style. Several other ideas say that the Pitbull comes from way before the Romans; in fact, the ancient Greeks used a now extinct dog breed as a forerunner to the Pitbull.

Then the breed spread to England where they were known as the mastiff when the Romans conquered Britan they soon fell in love with the Pitbull as well.

Another theory says that the conquering Normans used a large mastiff-like dog to hold onto a rampaging bull. This action soon turned into a sport known as bull-baiting, this is their origin of there name Pit-bull-dog or otherwise known as Bullpit.

Their fur colors could be Grey, black, fawn, silver, brown, and or silver, but most of the time the Pitador will mostly be the color of black except for the chest and the tip of the tail. the labrabull is a small to medium-sized fellow. He/she will 20-24 inches at the shoulders. Their temperament is kind, gentle, playful, loving, loyal, silly, and best of all a hard work.

You may be worried about the Pitbulls temperament showing itself in the Lab-Pit but never fear. For the PItbull Labrador Mix is really big snuggler with any who can spare the time. I tend to think that the Labrador’s gentle side generally takes out any “aggressive” behavior. If your still not convinced then the proper training of the Labrabull will turn down the “aggressive side”

What are the Socialization and Training needs of the Labrador Pitbull Mix?

Training, Socialization, and Exercise are needed to maintain a healthy, loving, respectful relationship with the dog. If the dog is missing any of these three things then you will not have a respectful, and loving relationship.

The Lab-Pit like all dogs needs to be socialized at an early age, it is an important first step to creating a very stable and loving relationship with your Lab-Pit. The general idea is to get he/she interested and unafraid of different sounds, i.e cars, trucks, slamming doors, and other things that make a loud sound.

Training your Labrador Pitbull Mix should take no lesser than 30 minutes a day while he/she is a puppy! This is essential that you imprint on their mind that you are the boss. Any command you have given them they need to follow it, no matter how many times you need to repeat the command do not give up.

If you really don’t know what you’re doing I would suggest you find a much easier dog to train, but if you really want a challenge then I say go for this dog! Get professional help, this allows you to make mistakes and have the pro take the hits if all the training blows up. 😉 ( just kidding!) The real reason to go is to get some expert advice from a really good source of info.

First start training her to sit, lay down, stay, and come, once you get those four basic commands down pat without any trouble you can move on. Here are a few more training exercises, heel, which trains them to come to your heels. With me, leave it, drop it, wait, leash walking – leash walking is very important you don’t wanna be flying down the street holding on for dear life because your dog saw a squirrel or something.

A little side note here- Beleive me when I say being dragged by a dog is not fun! When I was around 8-9. My dad sister and I were at a park and I decided I could run fast enough to keep up with our dog Onyx a Doberman mix. Shortly before my failure, my dad told me to never let go of the leash because we were near a busy road. So I waited for them to walk halfway around the track.

Then I said something to the effect of “Getty up!”. For the first two seconds, we were flying down the track then something happened and I was flat on my stomach head banging up and down. True to my word, I never let go for the whole seven seconds it took for Onyx to go halfway around the track to reach my sister and dad. Though truth to tell it felt like a thousand years!

Anyways going back on track, I wish for no one to experience being dragged behind a fast-moving dog. This is why training any dog especially big dogs to walk at your heels is very important.

What is the Temperament and Exercise Needs of the Pitador?

Labrabull’s are sweet, loving, caring, loyal beyond belief, playful, and gentle, the Lab-Pits are some of the gentlest dogs. The Labrabull’s parents are the Labrador and the pit bull, both of which are kind, gentle, playful, loyal, athletic, watchful, and last of all friendly natured.

Some people might be thinking but where is the vicious man-eating side of the pit bull in the Labrabull? I can tell you in four words. It is in the way you raise, train, socialize, and exercise your Labrabull that will determine whether or not you Labrabull is a good boy😇 or a bad boy👹.

Labrabull’s should be exercised every day, for at least 30 minutes whether that is running, jogging, walking, and or playing. If the Labrabull does not get enough exercise or any then they can become depressed, they can also make some major trouble in and out of the house.

So if you can’t give them the right amount of exercise then you might just wanna get a dog that is fine with 10-15 minutes.

What are the Labrabulls Health and Grooming needs like?

Lab-pits grooming is pretty basic 10 minutes brushing every week during the summer and winter, and 15-20 minutes during the fall and spring every three days. They also need an ear cleaning every two weeks so that the ear wax does not go into and ear infection.

Images of Honey the Pitbull Labrador Mix! By Jennifer!

My name is Honey! I’m a Pitbull lab mix that was rescued by the coolest loving family. I’m so sweet and love meeting new furry friends! Much love 🐶❤️🐾

If I were to rate the Lab-pit I would give him/her a 4 out of 5 stars due to their health issues, which are larger than most mixed dog breeds. But that should not stop anyone from buying/fostering/adopting this magnificent dog breed.