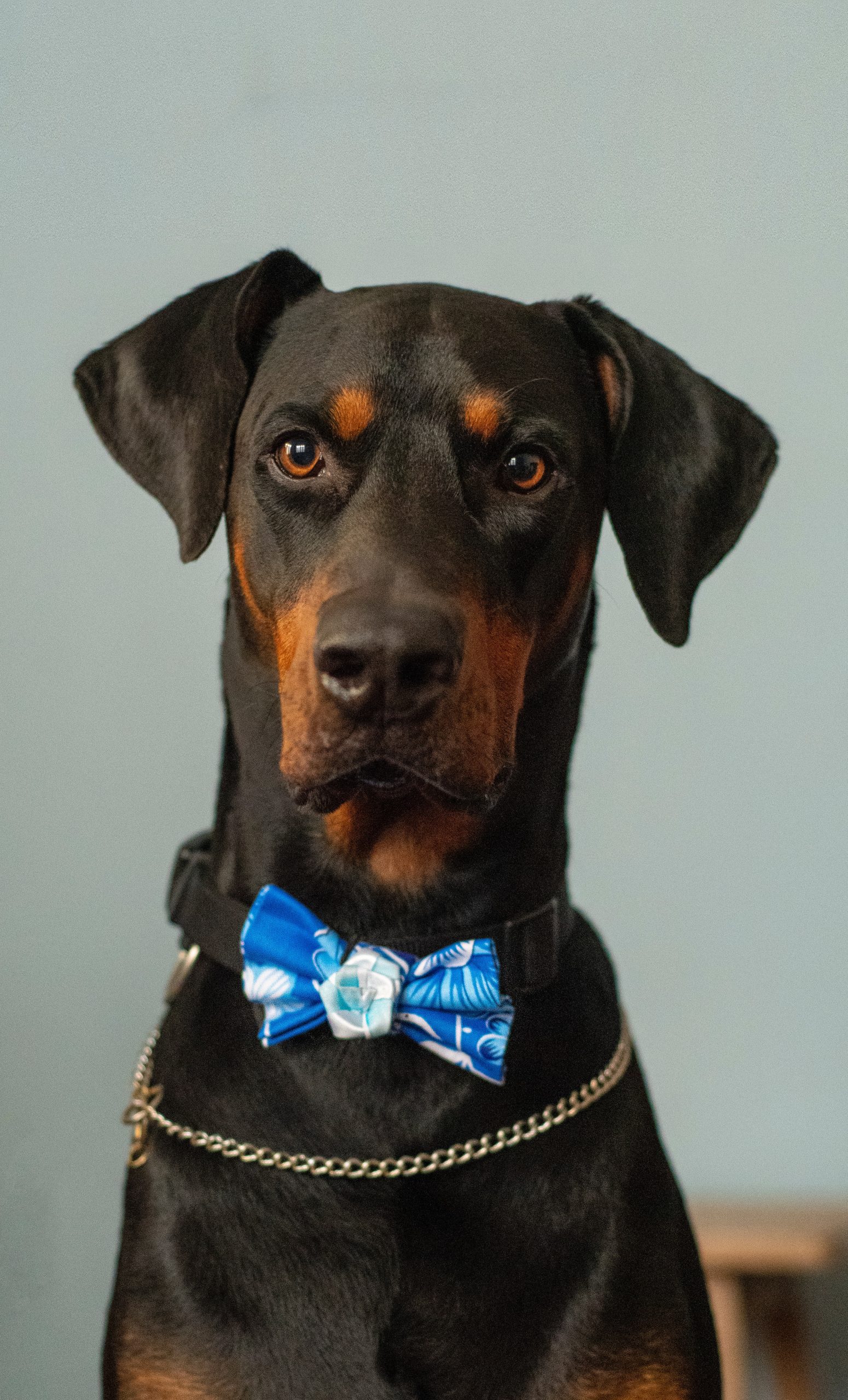 The Rotterman or Rottweiler Doberman mix is a mighty, alpha dog breed that needs firm yet loving leadership throughout his/her life. The Rottweiler mixed with Doberman dog is not for new dog owners. They need someone who is very experienced with many other alpha dog breeds before they can get this breed.

The Rottweiler Doberman mix will continuously push on the boundaries of the rules. Both the parents are headstrong alpha pack leaders. Both breeds are known to try and become the alpha of the pack (Including over humans if allowed).

This is why an experienced dog owner must own this dog breed. If you are a beginner, this breed will yank you about like its favorite rope toy during playtime.

This article will give you the best information that you are looking for. We will start with both of the parents, who they are, what they are bred to do, and then move into the Rottweiler Doberman Mix!

The Doberman is perhaps the most infamous guard dog in the world, the Doberman Pinscher is known for its:

The Doberman was created in 1890 by a German Tax collector by the name of Karl Friedrich Louis Dobermann. They are fast, sleek, protective, and have earned the reputation as one of the top Guard Dogs Breeds!

This breed was created for one purpose: Keep the owner safe. Since the Doberman’s natural instinct is to guard and protect, they’re easy to train and eager to fill this role.

Why are Doberman’s Great Guard Dogs?

What makes Dobies one of the world’s best guard dogs? They’re fearless.

Dobermans are easily trainable because they’re eager to fulfill your every command. This noble breed would give their own life in order to protect their family (pack).

The Rottweiler the most infamous guard dog in the world! But did you know that they are also one of the oldest herding dog breeds in the world? The Rottweiler dates back to Roman times. Back in 70 A.D, the Romans took the Rottweilers from Weiler, Germany (now, Rottenberg), hence the name Rottweiler.

The Romans used the Rottweiler for herding cattle, and for protecting the cattle and other herd animals from wolves and other predators. Rottweilers were also used as meat cart pullers as well as personal protection detail.

Personality and Temperament of the Doberman Rottweiler Mix

The Doberman Rottweiler Mix may look scary, but deep down below, they are the world’s biggest snuggle bug!

This part of the article is split into three different sections, training and socialization exercise and temperament health and grooming.

The Rotterman is very much an alpha type of dog. There is no way of training it out of them, it is just coded into their DNA. The best thing that you can do for your Rotterman is to give it the training, socialization, and exercise it craves!

Let’s start off with the training of the Doberman Rottweiler Mix.

Training is very important, while your puppy is young and their mind is still impressionable. The best thing that you can do is train train train! Whether you have four hours of free time or just five minutes. Do as much training as you can.

Take as many short play breaks that you need, but just make sure to train them over and over again! The more you train them the more they will give you in respect!

Once your puppy is ready, take her to puppy classes. Where the trainer can hone in on the place where you need help!

The second most important thing to give your Rottweiler Doberman Mix is socialization. To little socialization can lead to disaster. You can never give your new dog too much socialization, even if he is seven years old! You might be asking your self: “Why is it so important for my dog to get the maximum amount of socialization?”.

Well, it is because the parents of the Rottweiler Doberman Mix are two very strong, alpha pack leaders. They were originally made for the purpose of guarding the home, as well as herding animals in the Rottweilers case. Both parents are again Headstrong alpha dominate dogs, and they will transfer that drive to their offspring.

The best way to dampen that drive is to get them well socialized with as many animals, and humans as you can. Take your Rottweiler Doberman Mix out with you whenever you are out in the city, let s/he experience the noises, smells, people, cars, and trucks. When your puppy is older you could also take s/he to puppy classes, allowing s/he to know other puppies.

The exercise needs of the Doberman Rottweiler mix is can be an active dog breed, you need to give them atleast 30 to 45 minutes daily. Otherwise, they can become obese and depressed if their exercise needs are not given to them.

Other than that they would be happy to join you on the couch until something or someone catches their attention. When walking you should not let your Doberman Rottweiler Mix off the leash. Until he/she is well trained and socialized you do not want your dog branded as the Jackle & Hyde of the neighborhood.

You can always train the Rottweiler Doberman Mix to be gentle and soft around new people he has just meet. All it takes is lots of training and time for those qualities to be noticeable.

In this part of the article, we will show you both the parent’s health issues and then the Rottweiler Doberman Mix health issues.

The Rotterman’s grooming is very light, compared to some dogs. (And here is our favorite dog grooming brush for Zeus!) For instance, the Labrador is the worlds reigning champ for shedding the most dog hair each day.

The Doberman Rottweiler Mix needs a brushing once a week, maybe even once every two weeks during summer and winter. During spring and fall, you should brush them twice a week even if it’s just for five minutes it will really keep the fur down to a minimum.

The Rottweiler Doberman Mix needs a firm but loving master, one who is experienced with large sized dogs. This breed is an alpha dog if you do not control him or her they will walk all over you, and your rules. So if you want this dog please be responsible and ask your self: “Am I really ready for this mantel of responsibility?”

If not there is no shame in saying: “No I am not.” Build your confidence and your skills with a smaller and easier to train dog breed before getting this awesome dog!

We already have too many dogs in the shelters, so please if you think you are up for this dog make sure you train, socialize and exercise the Rottweiler Doberman Mix well so that he/she does not end up in a shelter labeled as “aggressive”.

Thank you for reading this article on the Rottweiler Doberman Mix. If you decided that the Rotterman was too much we have another article on the Labrador Doberman mix that is much calmer you will really enjoy it!

For those of you who have or are going to get a new puppy! We have several dog name article just for you!