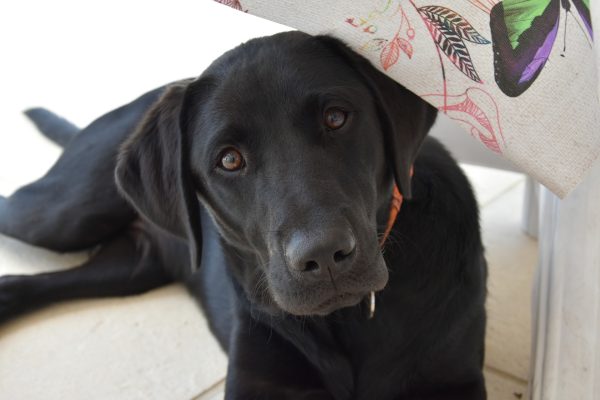 You might wonder, what are the differences between the English Lab vs American Labrador Retriever? Well, we have that answer and many more in this article.

First, we will give you some general information about both the English and American Labrador’s qualities. We will then get into the meat of the subject, what are the differences between the American Lab vs the English Lab?

America’s favorite breed of dog, the Labrador Retriever, is an agreeable and friendly companion that is a popular choice for families. Labs are highly social and have a love for all people, children, and animals alike, which explains their widespread popularity.

To set the record straight, there is only one breed of Labrador Retrievers. If you want to cut to the chase and see the list of traits, you can scroll down to the end. Meanwhile, here’s a bit of elaboration to put it all into perspective.

All Labrador Retrievers come from the same family tree:
Newfoundland, Canada, early 1800’s, named after the Labrador Sea… likely for their love of the water.

Like any family, there are variations in appearance, but the core DNA is the same. Within one small family of four humans, you can have different colors and texture of hair, skin and body structure, though most are more similar than different.

In any given ethnicity there can be a wide range of variables, yet the DNA still traces to the same heritage. So too, for the Labrador family.

As with human ethnicities, some cultures have more variations than others. Same with dogs. Take the Maltese breed, for instance, all Maltese have the same color hair and build, Labrador Retrievers have many color and hair length combinations.

Same thing with Rottweilers there’s no mistaking a Rottweiler. All of them come in the same colors and mostly in the same body range.

To delineate which side of the family tree a Retriever belongs to, they’ve been classified into sub-groups. So now let’s take a look at the difference between the American and English Labrador.

Where did the American Labs come from? Canada! To be more specific they came from Newfoundland Canada near the Labrador Sea. The people needed a dog that would love to fetch all day long, and not get tired of it.

They also needed American Labs to have a very soft mouth, a friendly demeanor, and most important a double coat so that they would not freeze up like a log the instant they jump into a cold lake, or the sea.

American labs are always eager and ready to be active. So it’s no surprise that American Labs are, for many the preferred choice for field trials and hunting. When they’re not hunting though…

The differences between American and English Labradors go beyond appearance. Can you guess which one is more energetic?

Being bred for work, the American labrador is still a great family pet but they have a higher energy level than her English counterpart. You probably guessed it, right?

The American Retrievers love to be on the go, or into something. They’re very mouthy, so be sure to have lots of chew toys at hand. Like her namesake, the American lab can be a reasonably headstrong lass, so owners need to make sure to train her well, or she may run circles around you!

“I would bring my lab everywhere. No matter how far away she wandered, a good trademark whistle would always bring her back” – Mark

Now we can immediately calm down a bit because the English Labs are the more mellow cousin. English Labs are slightly shorter and stockier, English labs have a thick, powerful neck, a thick—sometimes wavy—coat and a wider stance, giving the British variation of the breed a more powerful appearance.

Now you might be asking where did the English Labs come from? Well in 1800, a couple of English noblemen were in Canada. They found out about the Labrador and decided that they needed a good hunting dog. So when they returned to England they had the ancestors to the English Labrador Retriever.

The English Labrador Retriever is commonly bred for show and conformation, which is well-suited to their quieter and calmer personality. Being much more relaxed, (you might even say British style, ‘reserved’), the British labrador is considered a better choice for first-time dog owners.

As they are generally easier to train and don’t have quite as much (American-style) over-exuberant energy. Make no mistake though; the English Retriever still loves to play and have fun.

“My golden Labrador Molly used to bring us presents whenever we returned home from being out. A shoe was her item her choice but she wouldn’t let go of it for ages! We had to teach her to ‘release!’” – Chloe

The long and short of it:

However, all the personality traits we love about the Labrador are present in both breeds. So if you like one, you will also enjoy the other. All branches of the Labrador Retriever family are loyal, loving, affectionate and playful without an ounce of aggression.

Labradors are great family dogs, but not great guard dogs. So yes… they’ll sound the “dog alarm” and likely bark if someone is at the door, but they’re just as apt to greet the visitor, tail wagging as a friend.

The Labrador family is loyal, loving, friendly, and playful without an ounce of aggression.

Being such a versatile and loveable breed, it’s no surprise that Labradors are a popular choice to mix with other breeds. There’s the Labradoodle, Labmaraner, Lab Hound, Huskador, and our very own Labrottie – a Labrador and Rottweiler mix.

All Labrador Retrievers are prone to obesity with age if they get too many treats but not enough exercise. Being an intelligent breed, they need something to keep them occupied and busy, or else they can become obsessed with treats instead.

For a more extensive article, with comparisons and photos of the differences between the American Lab and English Lab puppies named Tess and Rachel.