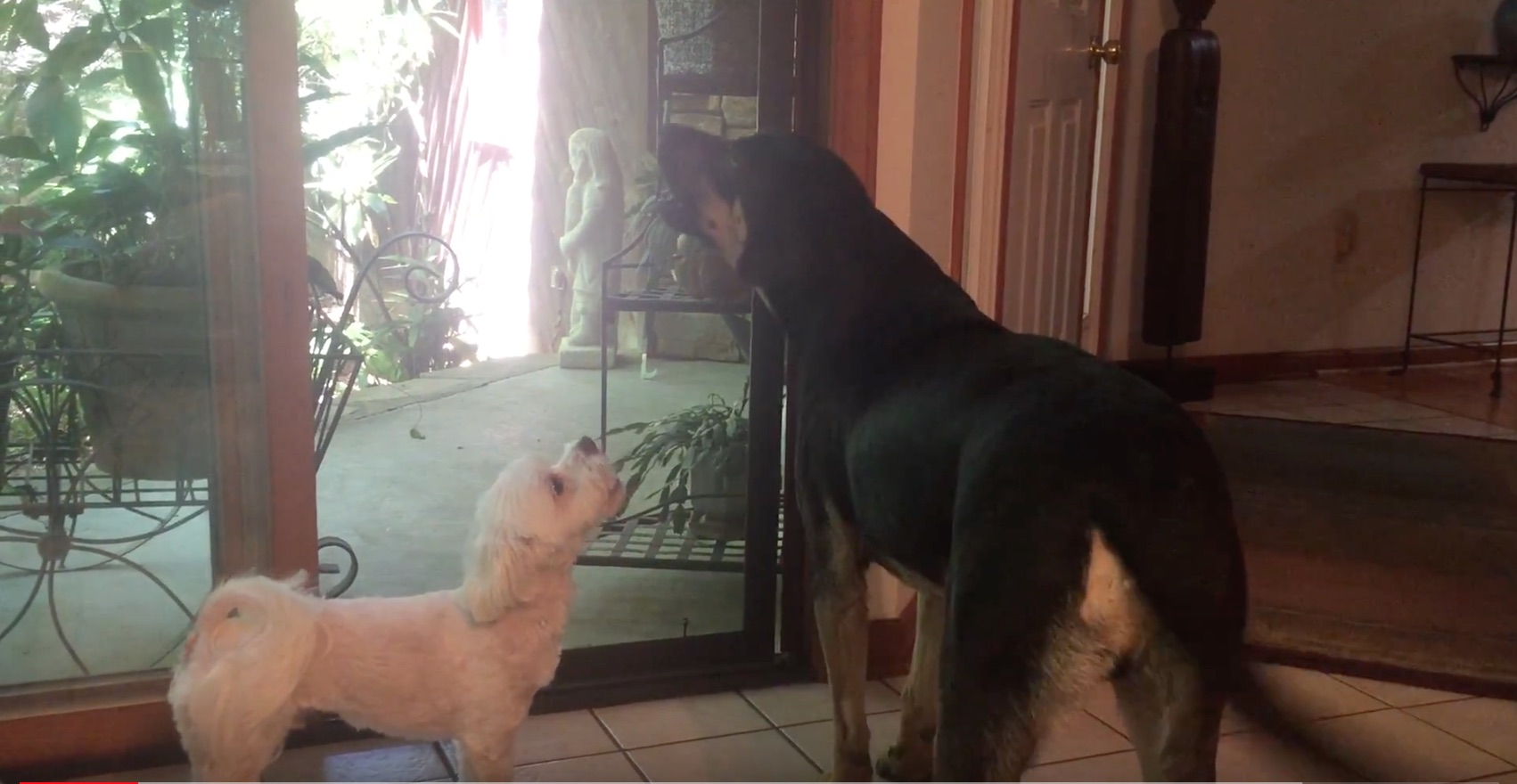 Zeus always jumps up to howl when he hears sirens. Our Maltese, Caspian, never howled before Zeus. But now, whenever they hear a siren, or sometimes other dogs howling, they both jump up and relish the howl.

Caspian is snarly to Zeus, except when they howl together. I suppose he’s earned his attitude because Zeus’ 80 lbs have inadvertently tumbled Caspian’s 7 lbs more than once.

Furthermore, Caspian is an alpha dog in a small dog’s body, poor guy. I bet it’s hard to maintain that around a big dude like Zeus. We don’t blame Caspian for being a grouch, and sometimes more than that. On occasion, Caspians growls escalate to biting Zeus and hanging onto his neck.

Whenever Caspian attacks Zeus, good ole Zeus takes it and respectfully waits until Caspian is over his tantrum. (Are you done yet? ) I’m sure it helps that Zeus was a puppy when he came so even though he’s more than 10x Caspian’s size, he lets him take the lead. So… Zeus’s labrottie temperament is a super cool dude.

Dogs that howl together, stick together.
~Labrottie.com

Anyway, as I was saying, it’s fun to watch how these guys bond over a good howl. It doesn’t happen as much in this video, but sometimes the dogs howling together occurs like this. (I’ll give them “voices,” so you can more readily imagine the scenario).

Scene: Siren in the distance.

Caspian jumps up and runs to Zeus and barks.

Zeus: “Is that a siren buddy? Is that a wolf brother in the wild…?”

Zeus starts to bark a few and then he belts out his deep baritone howl.

Zeus now gives Caspian the base note, the example to model, and the courage, and he takes off in his own barking-into-a-howl in a perfect tenor role, the Maltese joins the labrottie.

Caspian can’t hold his notes as long as Zeus can, but he gives it his best shot and he’s right on key… most of the time. When Caspian loses his howl, he’ll pop back into the percussion role and bark along. A little dude can only hold a big howl for so long.

A Howl of a Great Time

We’ve now caught this entire usual sequence in three different videos, all pretty short, that sum up the general flow of the howling incidents. These boys howling together always brings smiles to our faces, and we hope it does for you as well.

After the second video where they get to howling and harmonizing, Caspian goes to the rug, does his big-boy strut and scuff, and then does down-dog in play mode before running off all full of himself. Meanwhile, the Rottweiler mix is back on his bed, lounging.

Video of Dogs Howling to Siren

So the sirens were active today, and we captured Caspian trying to goad Zeus to howl. Zeus, the labrottie was lounging lazily on the cool tile floor and Caspian the Maltese kept egging him on to howl.

This was the second time today, so their howls never quite revved up as much as usual, you’ll see that in video 2, which was the first howl of the day, but we didn’t capture the whole sequence in one session. So these are laid out by order of the usual flow of the howl sequence. Sorry. Confusing, right. Anyway… start with #1, and you should be good. Hope you enjoy it!

Caspian the Maltese finally got Zeus the Labrottie to start howling in video 1, (though they weren’t as resonate because they were tired). Now in the next video 2, they really get it going (which was actually their first full howl of the day), and you can hear Caspian get his tenor going.

Before Zeus, adopted us, (we found him lost and scared under our deck), Caspian never howled. Now he can and feels like a big boy… somewhat connected to his inner wolf.

Once they’re all howled out, Caspian the Maltese ends completely fascinated by Zeus the Labrottie. He usually walks around him, sniffing him all over, to get a whiff of that macho big dog scent that Zeus must exude when he hears—and responds to—the call of the wild.

Dogs Howling at Sirens 3 – Caspian is fascinated by Zeus

How to make your dog howl…? Play this video for them! (Especially video two where they really get wound up). Be ready to film it and let us know how it goes! We can post your video here too if you like.

Also, if you want us to post any of your dog’s photos and info, please send it in an email, and we’d be glad to share! We’ll send you a reply as soon as it’s up or if we need any more info. Be sure to include your dog’s name and breed so that we can add that in the photo (and video) captions!