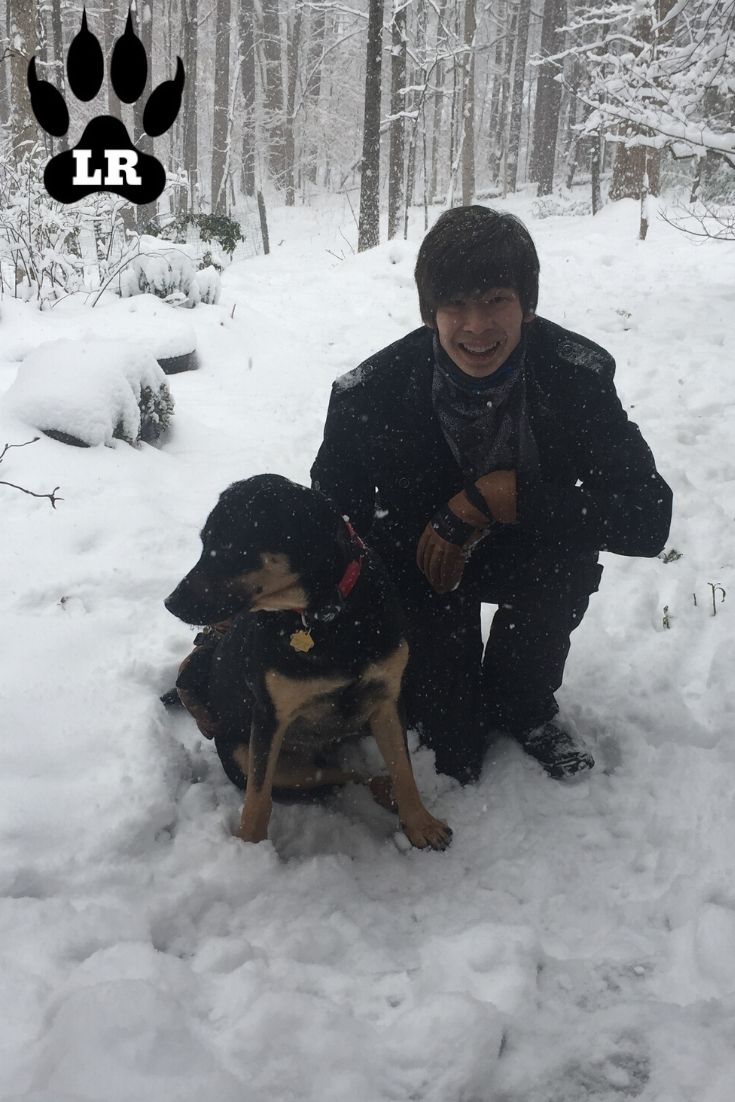 It was exactly one year ago to this day that Zeus my Labrottie, a frightened puppy of around three months old was found hiding under the deck.

He was frightened and scared out of his mind, Zeus had lost his pack, and so seeking warmth and shelter Zeus came to our house.

It all started when I came back from work, on a cold damp night, thinking of nothing but getting some warm soup and watching a movie. When my mom told me that we have a strange puppy hiding under the deck, I, of course, being curious.

Grabbed a flashlight and went down a pair of steps and looked into the shadows. To see a really small puppy about 15-20 feet back stuffed into a corner.

He was shivering and scared, I ran back in and yelled: “He’s still there!” I prepared a large bowl of dog food and stepped out of the house. Where I crawled a little bit under the house and placed the bowl of food down.

For a full account of the story of our boy Zeus, we have that article here!

Zeus is an upstanding citizen of the Labrottie nation!

Zeus the Labrottie is (as I have said above,) an outstanding citizen for the Labrottie nation! Over the year’s I have noticed several things about him. First off Zeus is a fine watchdog, always watching for people and things that are out of place in his mind.

The second is Zeus loves to play! There is nothing else in the world other than walks that gets him so excited! Zeus often times get the zoomies whenever we go out to play his favorite game. By the way, his favorite game is tag. When we play tag it can become a bit rough, to say the least.

Zeus loves to rush by me brushing his body against mine, trying to get me to change my direction. Which he oftentimes succeeds in doing so. Once I am running in the opposite direction he tags me and rushes off.

Their he waits for me to catch up to him and then he runs off again. Waiting for me catch up, one of the only ways to catch Zeus. Is to hide out until he is close enough to where I can pop out of the woodwork tag him and dash off.

Anyway, here is a video, taken a couple of weeks ago during our second good snow here in North Carolina a year after Zeus was found. He wake’s up every morning, always eager to please one of the family members.

But mostly he looks up to me, because of our close bonding during his ordeal. But he also looks up to me because he knows that I am his alpha and that there is nothing I would not do for him!

I know for a fact that I would not have been able to forgive my self if I had simply let him stay under the deck and freeze to death!

We think Zeus is a labrottie, but some folks say he has German Shepherd in him as well. The reason for this thought is because of his long body, and secondary whiskers high up on his checks. Sometime soon I may get a DNA test for him. But meanwhile, what matters most, no matter the breed, but especially for high energy breeds is:

Tips for a Healthy, Balanced Labrottie!

Rottweiler mixes are an energetic and intelligent breed. They love to listen and do what they’re told, but they can also be very headstrong and determined. If they see something they want (or don’t want) to do. This means that they need a strong alpha pack leader!

The trick to remaining as the alpha leader is to constantly train them in new ways. If they don’t follow the order don’t give up keep commanding them to follow your order. Only then do you reward him/her with praises.

Zeus is well adjusted, but his slight weakness is that he’s afraid of people—especially men—carrying something in their hands. Perhaps he was abused and beaten by a man with something in his hand. We’ll never know. But what we do know is that it’s our job to try to socialize him and get him used to new people.

Other than that, as you can see, Zeus is a happy and playful dog. He’s my buddy, and we give each other a good workout. He wears me out, and I wear him out, and because of the extra exercise we both get, he stays happy and relaxed, and I get to stay active and fit!

If you have a Labrottie and would wanna share his/her photos here is our email! We also have an article on Labrottie Temperament and Characteristics which is really informative.